It’s been a long time since I posted a book trailer. Mostly because I keep forgetting to. But, this week I came across this newest one from Jon Klassen (brilliantly animated by Fran Krause) and it was too good to not remember to share. The third book in his pseudo hat picture book series is arriving this fall and it looks awesome. Enjoy.

This book looks excellent and the trailer just makes me laugh. I also keep thinking of the digger kids from that old TV show Recess. Anyone else remember that? I can’t wait to spend time with this new collaboration from these two awesome picture book makers. Check out Sam & Dave Dig a Hole by Mac Barnett, illustrated by Jon Klassen, just published in October by Candlewick.

Super excited to see this book. Not sure my childhood self could have handled it seeing as I was indeed afraid of the dark, although maybe it would have helped. My adult self is ready to give it a read though!

“This medium works best when it’s most suggestive, when it gives us the freedom to walk around and fill in these things on our own. But what’s amazing about this is, given all that freedom to be on our own and make these stories personal to us alone, we end up meeting each other anyway. We can’t help it, and there’s something hugely hopeful about that.”

Whew! What a day Monday was with all the amazing children and adolescent book awards. I sat glued to my computer for the hour broadcast and it is better than the Oscars for this book loving nut. I laughed, teared up, tweeted and cheered. If you haven’t seen the results, here is the official Caldecott announcement. Jon Klassen took the Caldecott for This Is Not My Hat (which I don’t own yet!) and he also received an honor for Extra Yarn. He is the second person in 75 years of awards to take the Caldecott and an honor within the same year. Hooray! (Leonard Weisgard is the other illustrator to accomplish this feat and that was back in 1947 when he won for The Little Island, and Rain Drop Splash received an honor.)

There were many other awards as well, some of which I know nothing about (sadly!). But I was excited to hear about Mo Willems Let’s Go For a Drive winning a Geisel Honor (a.k.a. Dr. Seuss). I already have several other winners on hold at the library that I haven’t seen yet, so I’ll be sure to pass along the word if I become enamored with one.

With all the awards and 2012 wrap up behind us, I’m itching to talk vintage books again as well as new ones. As the east coast is getting pummeled with rain right now, my mind got fixed on this cute little red book from 1959. So here is My Red Umbrella, by Robert Bright.

END_OF_DOCUMENT_TOKEN_TO_BE_REPLACED 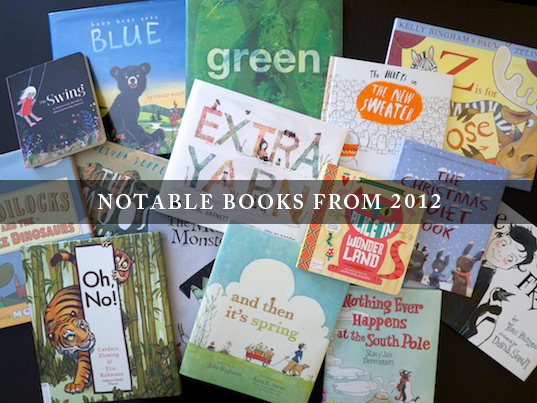 Or perhaps this post should be called the books I noticed and loved in 2012, as this is definitely not an all-inclusive list of the great books that came out last year. Whatever the title, I feel it necessary and enjoyable to point out a few of my favorite children’s books that 2012 offered. Some I’ve reviewed and will link to, and a couple others I intend on reviewing more in depth in the next few weeks. So here we go – 15 books to enjoy from 2012. END_OF_DOCUMENT_TOKEN_TO_BE_REPLACED

Hello. I’m Caryn, passionate obsessor of children’s picture books and an illustrator. This is where I share my ever-growing knowledge and love of children’s books. I’ll be reviewing books, sharing tips, and hopefully convincing the world of the loveliness of picture books.